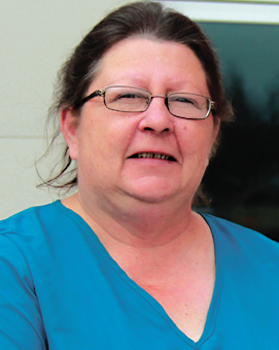 Sheila Willis likes to tell the story of her unconventional ‘honeymoon’ introduction to the trapping lifestyle, with her new husband Mel Willis.
‘Want to come beavering with me?’ asked Mel, a lifetime resident of Smith, and very familiar with the bush. Of course Sheila was game. How rough could it be?
Keep in mind, Sheila says, “I don’t like water. I don’t mind boats, as long as they’re not moving.”

This one, a 16-footer with a bung that turned out to not be doing its job, was most definitely moving.
“It was early spring, on the Moose (Fawcett) River,” says Sheila. “The water was very high. Debris and ice were floating down, and there was still snow on the ground.”
The idea was they’d drift downstream, with Mel shooting beavers. Then they’d camp at a likely spot and Mel would skin the animals.
Mel had done this many times. The difference this time is his new bride was with him, and the boat was overloaded, due to Sheila insisting on bringing lots of supplies.
“After he shot the first beaver, I looked down and said: ‘Is there supposed to be so much water in the boat? We started bailing.”
Then Mel managed to knock the paddles off. When they got to ‘the Big Jam’ on the river, Mel stepped out onto a log to secure the boat (because he wouldn’t run the rapids with Sheila in the boat) and promptly went into the ice-cold water.
It all worked out, though, and it still is.
Sheila was a transplanted city girl. How she got to Smith is an interesting story – one with a lot of gaps, so it won’t take too long to tell.
“I grew up in Salmon Arm, B.C.” Sheila says, the daughter of a minister in a “very, very, very” strict religious family.
To make a long story short, she rebelled.
With her parents, she says, “there was no grey area, so I skipped right through the grey area until I realized it existed.”
This was in Edmonton, where the family had moved when she was 16. She worked at different jobs, including for the first toner cartridge recycling operation in the area. She had various roles and was successful in sales, eventually calling it quits when she ran into a new administrator she didn’t agree with.
A change was in order, and as fate would have it…
“My best friend knew someone in Smith,” Sheila sys, “so we came up for a weekend. I looked around and said: ‘I always wanted to move back to a small town.’”
So she did.
“I got a job as a bartender,” Sheila says, at the old Smith Hotel. One day, in walked Mel Willis and ordered a ginger ale.
“Anything in that?” she asked him. “No thanks,” he said. “I don’t drink.”
“So I said: ‘More people shouldn’t and the world would be a better place.’”
That must have made a good impression, because one thing led to another, and the next thing you know, they were wearing wedding bands and beavering on the icy Moose River in the spring flood.
The couple also raised three sons. That was a full-time job, and the main reason Sheila remained relatively unknown until fairly recently, at least outside of Smith. She’s been making up for that the past few years, with a whirlwind of business and community development schemes that are – among other things – really putting Smith on the map. And not just Smith. 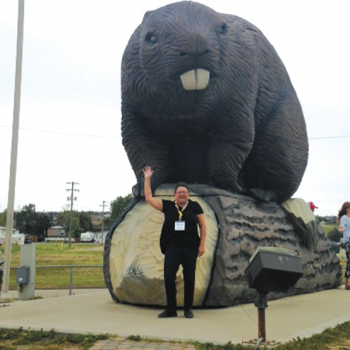 Sheila Willis of Smith, with the Beaverlodge beaver.
Willis’s latest and greatest scheme is the development of a smart phone ‘app’ that will allow visitors to northern Alberta to do self-guided tours of historical points of interest. It requires the establishment of a huge database, not to mention putting it all together so that traveling folks can whip out their phones and see these ‘sites’ indicated on a map. Click on the icon and up comes all sorts of info.
“This has never been done before,” says Willis.
One thing it took was the establishment of an organization, which is called the Friends of Historical Northern Alberta Society (FHNAS). It (mostly she) has done a lot of the footwork already and raised the necessary funds to get the app launched. Sheila says a lot of people in tourism are interested.
“I think we’re doing a really good thing with this app,” she says. “It’s much bigger than people realize.”
An example of how it could be used, Willis says, comes from someone who wanted to do a ‘circle tour’ of northwestern Alberta. Because nobody could tell them whether there was a gas station on a long stretch of northern highway, they decided against it.
“This will have it,” she says. And a lot more.

Sheila Willis poses at one of the points of interest that will be featured on the mobile app she’s developing for tourists in northern Alberta.
Willis thinks big, no question about it. In the past few years she’s started Moose River Tours, A Place to Pause retreat, the Smith centennial geo-caching project, and is a player in the Smith Community Development Council.
Did we mention she’s collecting key chains?
“We’re working on a world record,” she says. “We need about 42,000 and we’ve got 700 so far.”
With all this stuff going on, Willis is getting quite a reputation in the region for her vision and particularly her energy. But she has her challenges in that department.
“I have post-concussive syndrome,” she says, which arises from an early-1980s brain injury. She suffers from migraines and her memory doesn’t work so well when she gets tired. It took quite a few years, she says, but once she finally figured out (with the help of a neuro-psychologist) what was going on, she got into the habit of sleeping when she needs to.

“If I get tired I’ll go to bed at six or seven or eight and sleep for 12 to 14 hours, just to keep my mental capabilities where they need to be.”
With so much going on in her life, they need to be pretty sharp. Willis is the classic ‘go-getter.’ Why does she do so much?
“Why? The same reason I stepped forward and raised my best friend’s grandsons. More of us need to take a positive approach to the world around us. We need to start stepping up more and more. I’m a solution-finder. If the solution isn’t implemented, it does nothing.”
Sheila isn’t afraid to try unorthodox methods, either. One example is picking blueberries with her husband’s shop vac, something she became locally famous for.
“I was trying to figure out how to do it faster,” she says. “I decided to line the shop vac with flooring underlay. It worked real good!”
So well that she had a big volume of berries to clean. No problem, she devised a cleaning system (which she tried to explain, but it went over this reporter’s head) that she says gets her through 10 gallons of berries, “in about an hour-and-a-half.”
There’s a lot more going on, but we only had so much time to talk, not to mention only so much space to fill in the paper. But chances are you’ll be hearing more from and about Sheila Willis, of Smith Alberta. 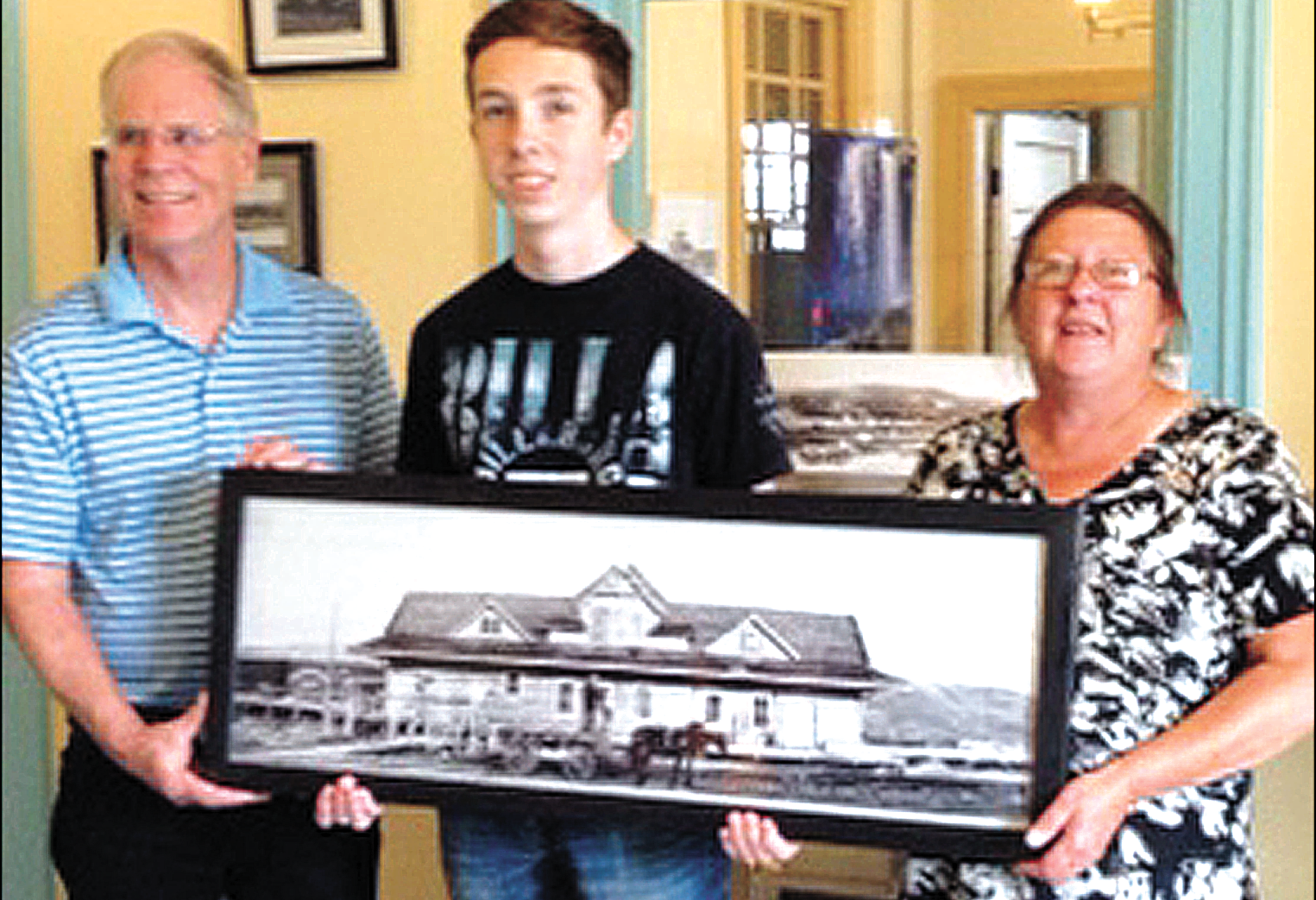 In 2014 two descendents of Rathbone Smith, the railway engineer after whom the hamlet of Smith is named, visited northern Alberta. Virginia residents Doug and Zach Smith are pictured at the Athabasca railway station with Sheila Willis of Friends of Historical Northern Alberta.