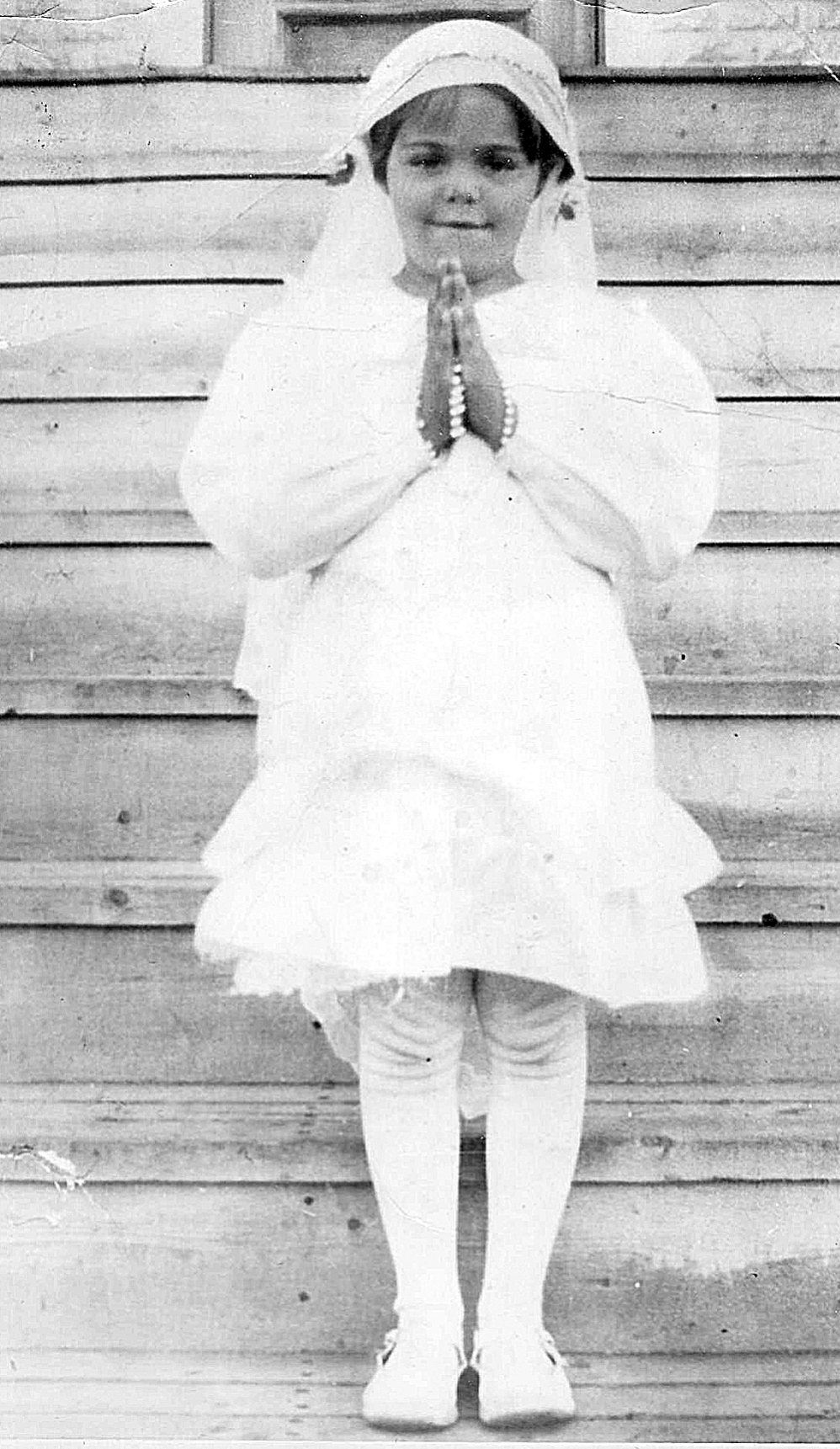 Pauline Roy during communion in the early 1940s.

Maurice Dubois won Pauline Roy’s heart in 1950, after almost a year of courtship, and the young Jean Cote resident travelled many miles to Falher by horse and wagon or sled, before they married.
“Ready to go court Pauline, twenty miles away, on a nice Sunday,” he wrote in his autobiography, ‘My Voyage’, which was a caption for the book.
They were married on Dec. 4, 1950 and would settle on a farm in Jean Cote to raise a family of four boys and two girls. 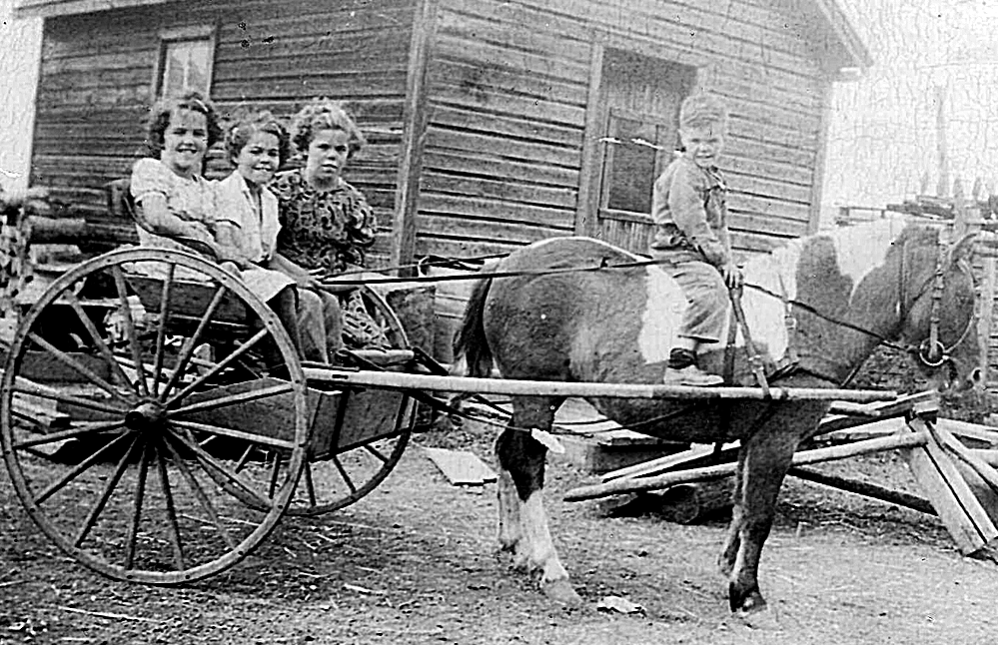 Left-right, are Simone Roy, Pauline Roy, Della Roy and Lucien Roy on their family farm near Falher in the early 1940s. Pauline and her siblings were able to take the cart and pony to Falher in the spring and summer for schooling, and return home to the farm each night.

Early life
But the story really begins with their parents’ arrival in the area in the 1914. Pauline Roy’s father, Theodore ‘Ticaille’ Roy, was born in 1905. ‘Ticaille’ and his family lived in Lynnwood, Massachusetts. They came to Falher in 1914, arriving by boat at Grouard and then travelled by horse and wagon the rest of the trip. Her mother, Jeannette Doucet, was born in Trois-Rivières, Quebec in 1908. 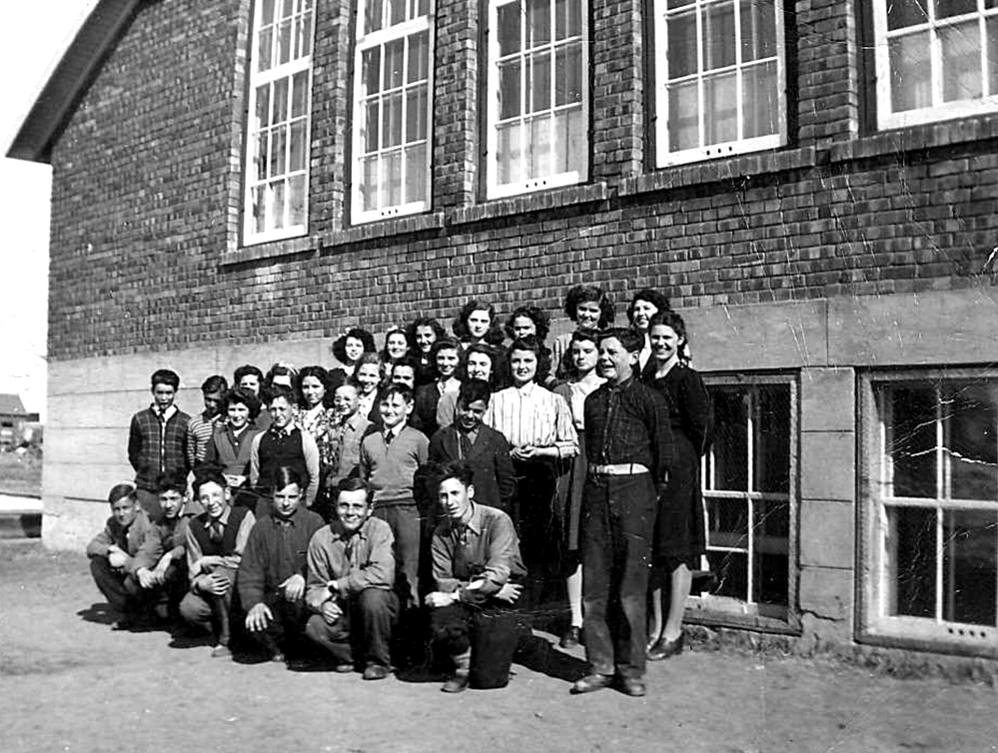 Pauline Roy attended classes in Falher, going as far as Grade 8. She is pictured third from the right in the very back row. This photo was taken in 1947.

Her family moved to St. Paul first, and then to Falher in March 1928. Pauline was born on July 24, 1932 and her siblings included three sisters and two brothers.
They lived on a farm near Falher and she attended school at the local convent, through to Grade 8. Pauline doesn’t have many memories of the Great Depression, but she never felt that she was lacking anything in life.
“On the farm, we had everything – cows, chickens, eggs and a garden,” she says. “We had a good life when we were young.”
Her father was the milkman for Falher, doing daily deliveries, and sometimes she helped him. The price of milk was 10 cents for a quart in those days.
Pauline remembers, when chopping firewood, that she kept the odd piece and drew a face on it, which became her doll. 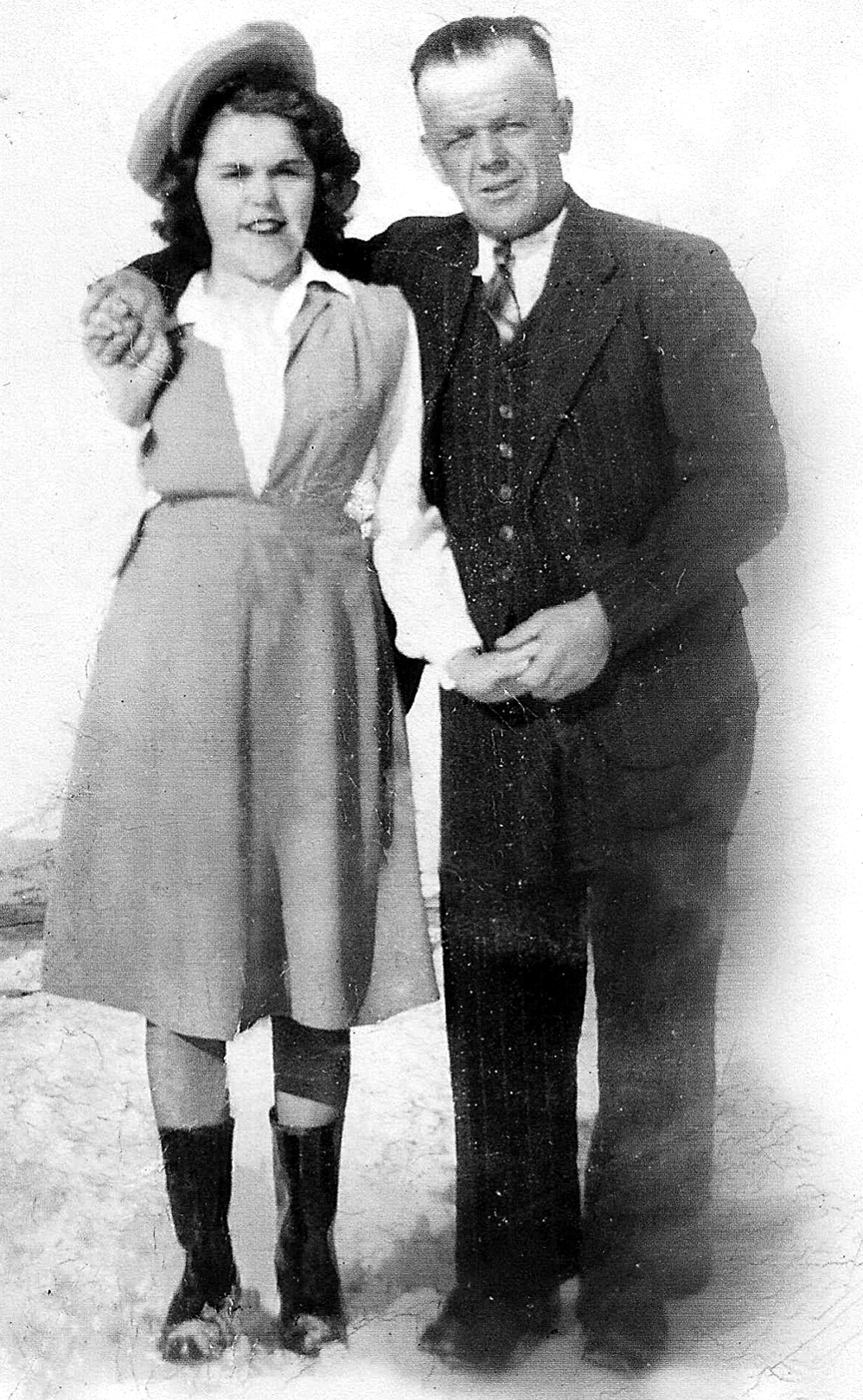 Pictured above is Pauline Roy with her father, Theodore ‘Ticaille’ Roy, in the early 1950s. Pauline snatched her dad’s hat to wear in this picture.

For schooling at the convent, there was the routine of rising every morning at 7 a.m., going to church and then to breakfast, and then to classes nearby. Some of the nuns were teachers, and her education was conducted in split grade classes.
Pauline remembers the strictness imposed by the nuns, including a dress code. Like other children, for most of the school year, Pauline had to stay at the convent for five days a week and she looked forward to going home on weekends. 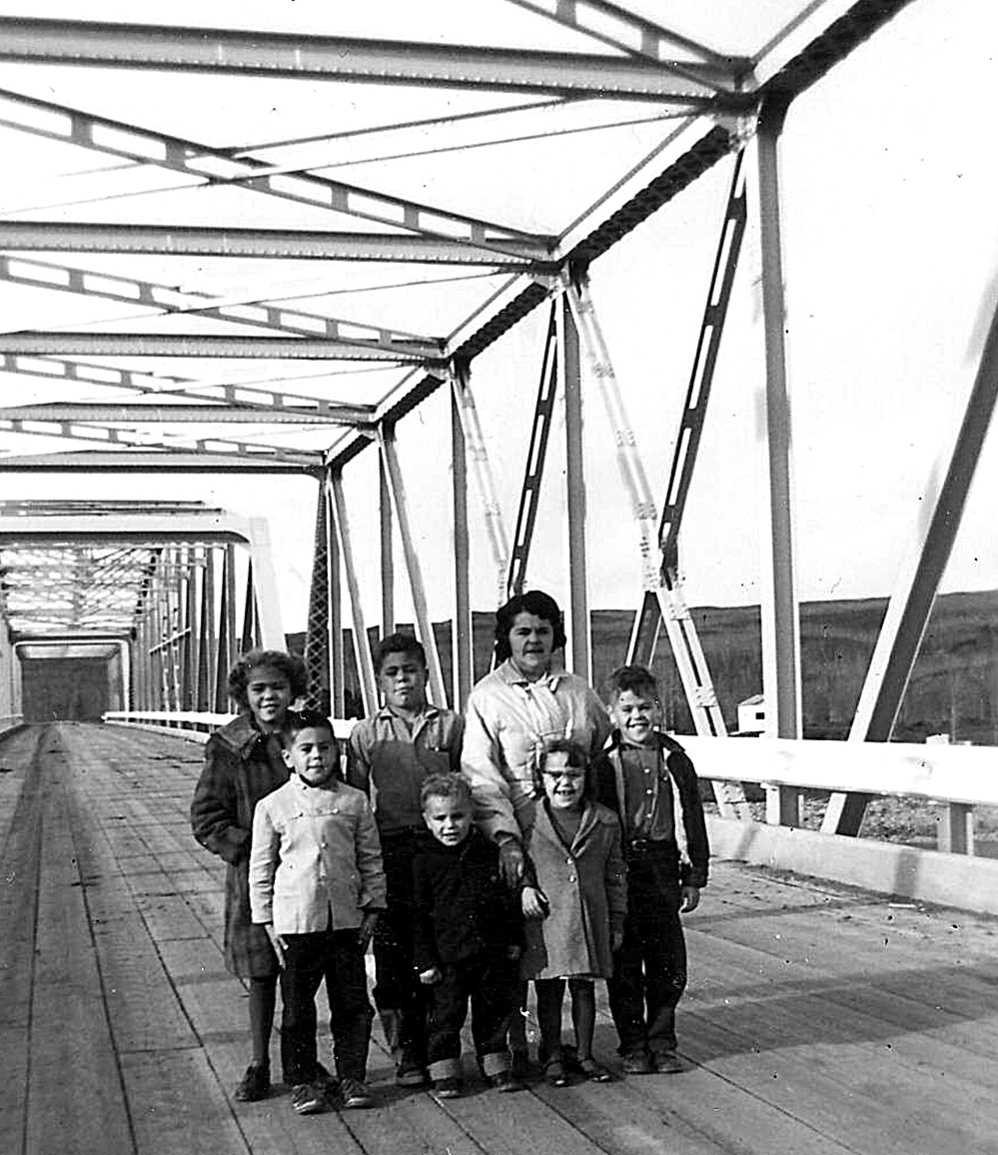 Pictured above is Pauline with her children on the bridge south of Guy in October 1963.

But during the spring and summer, she and her siblings were able to travel by pony and cart to school in the morning, and then they returned to the farm in the evening. Her mother had to provide food for them to take to the convent.
Outside class, student activities consisted of a slide, baseball and skating. Children in Grade 1 had to peel potatoes for the nuns, too.
Despite the nuns’ strictness, they gave her and the other students a good upbringing.

“The nuns were good for us,” says Pauline. 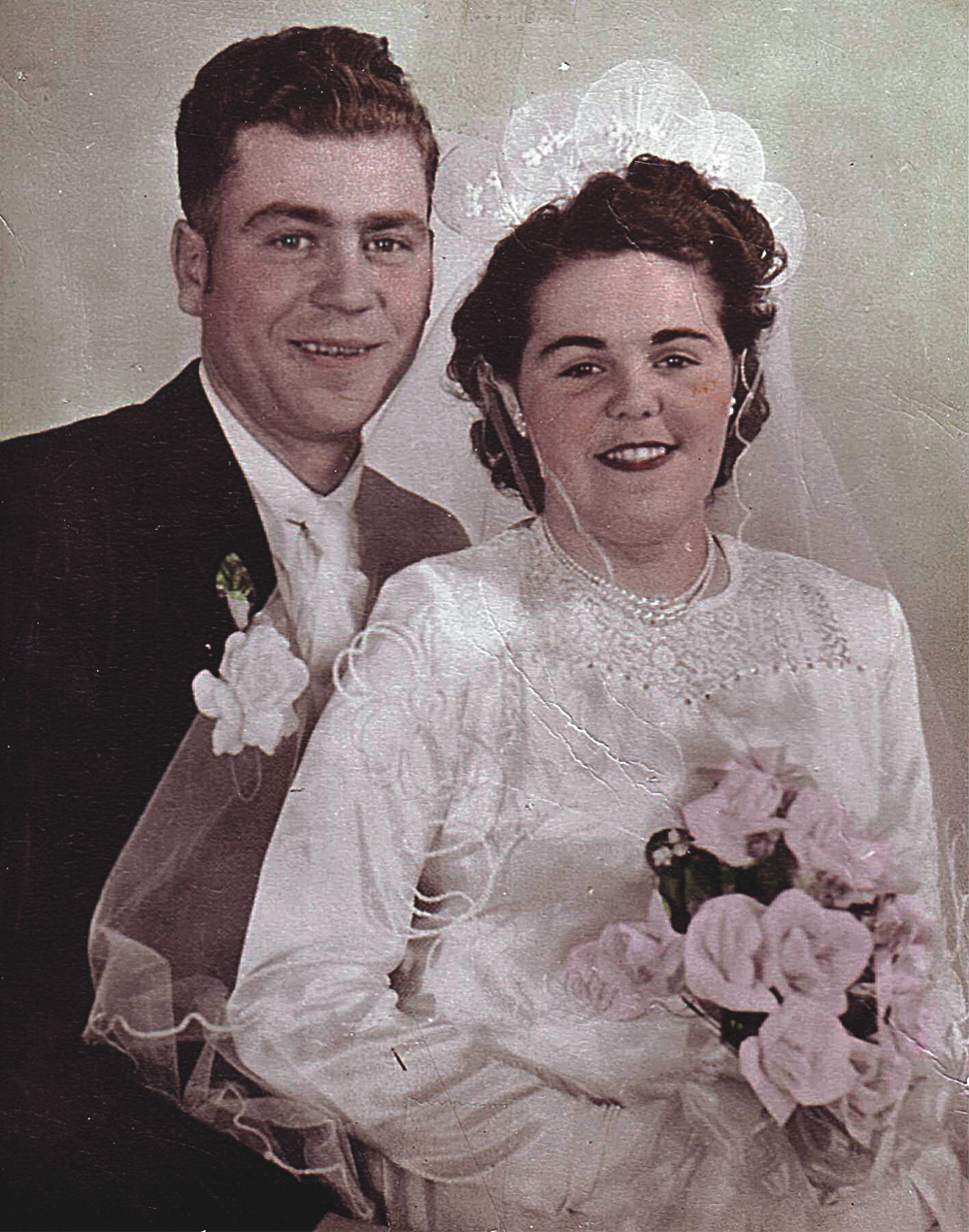 Marriage and farm life
Maurice Dubois was born in Quebec on Dec. 10, 1927. When Maurice was two and a half years old, he and his family moved to farm near what later became Jean Cote.
In 1949, Maurice met Pauline at a play in McLennan.
They were married on Dec. 4, 1950 and they moved to a farm three miles north of Jean Cote. He became a grain farmer, but they had horses and chickens as well. 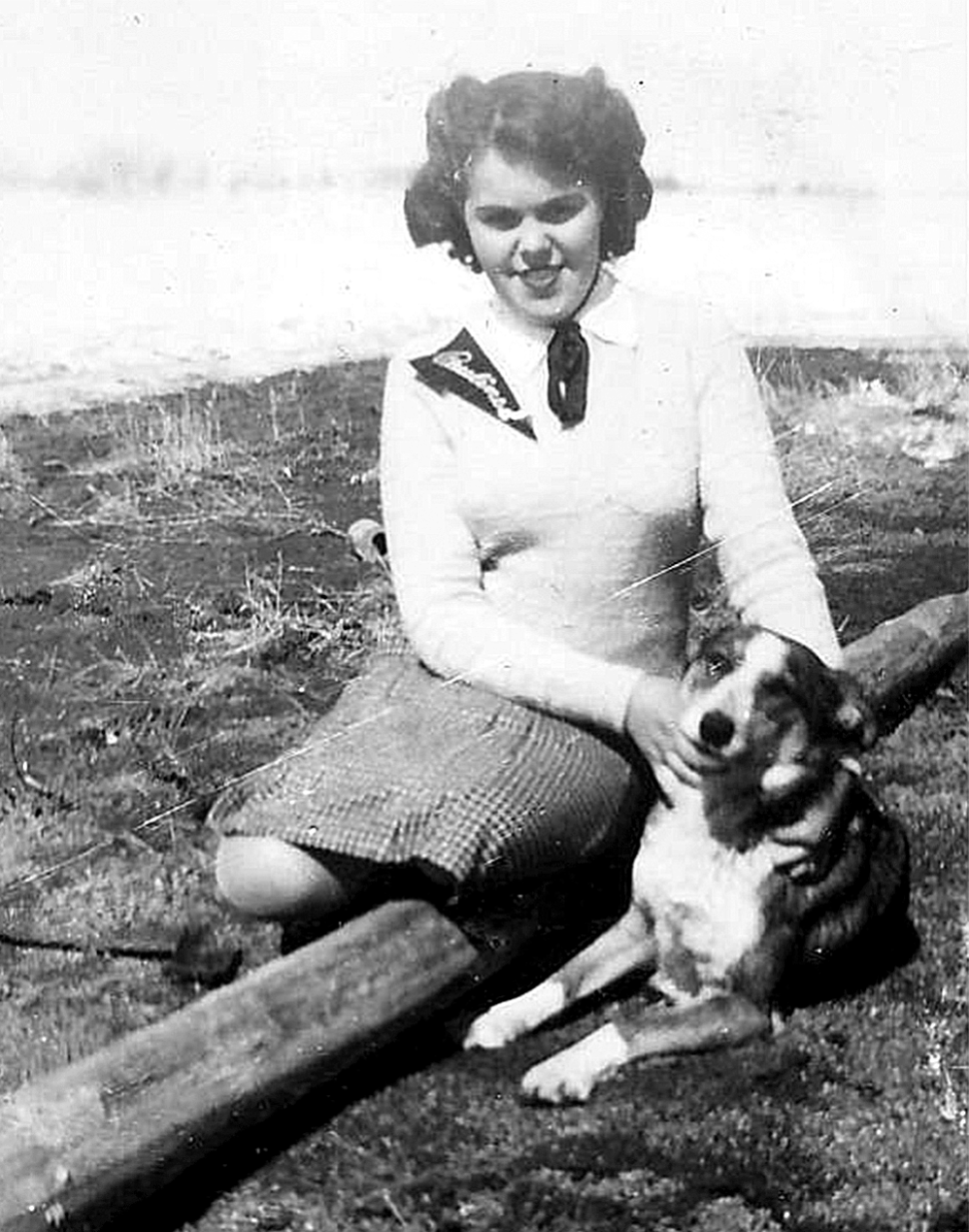 Pauline helped with the grain work, which included driving the truck and working in the granary. That is, until her family duties took over. They had six children – Norman, Marilyn, Roger, Victor, Diane and Gilbert.
They didn’t have many amenities, like TV and telephone service, until the 1960s. Pauline used a pedal-operated sewing machine, hauled water and chopped firewood. But she didn’t have to use a washboard for clothing.
Entertainment consisted of card playing and Christmas Eve parties at their residence. They had the largest home in Jean Cote and for the Christmas dinners, they would rotate between 40 and 60 people in and out of the house. 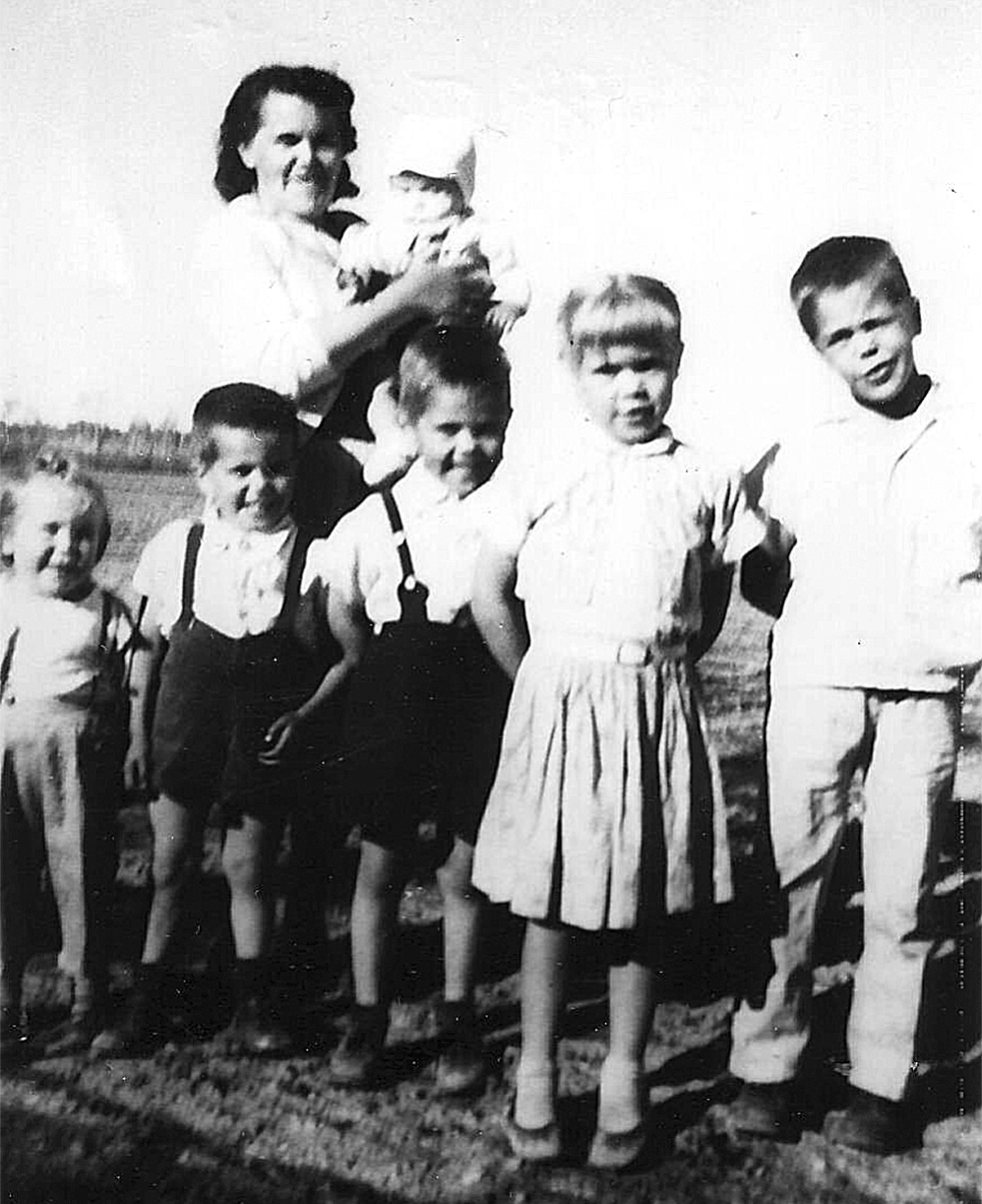 Pictured above are Pauline and her children in 1960. Left-right are Dianne, Victor, Roger, Marilyn and Norman. Pauline is holding son Gilbert.

Besides running the family farm, Maurice drove the school bus and he was also a welder and a mechanic.
They sold their farm in 1973 and moved to Peace River, where he became a corrections officer for seven years. He also bought the Esso gas station there in 1978 and ran it for five years. 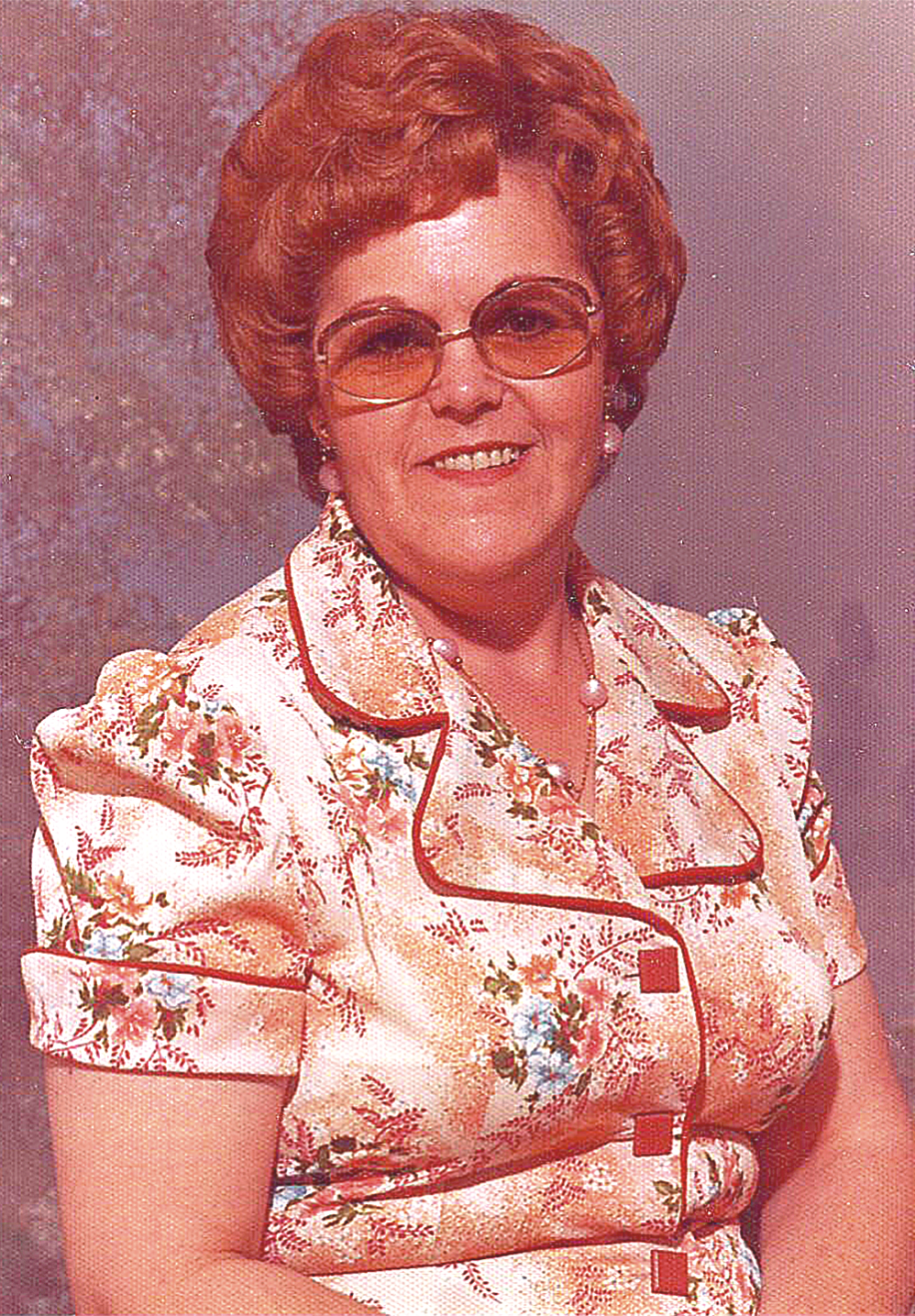 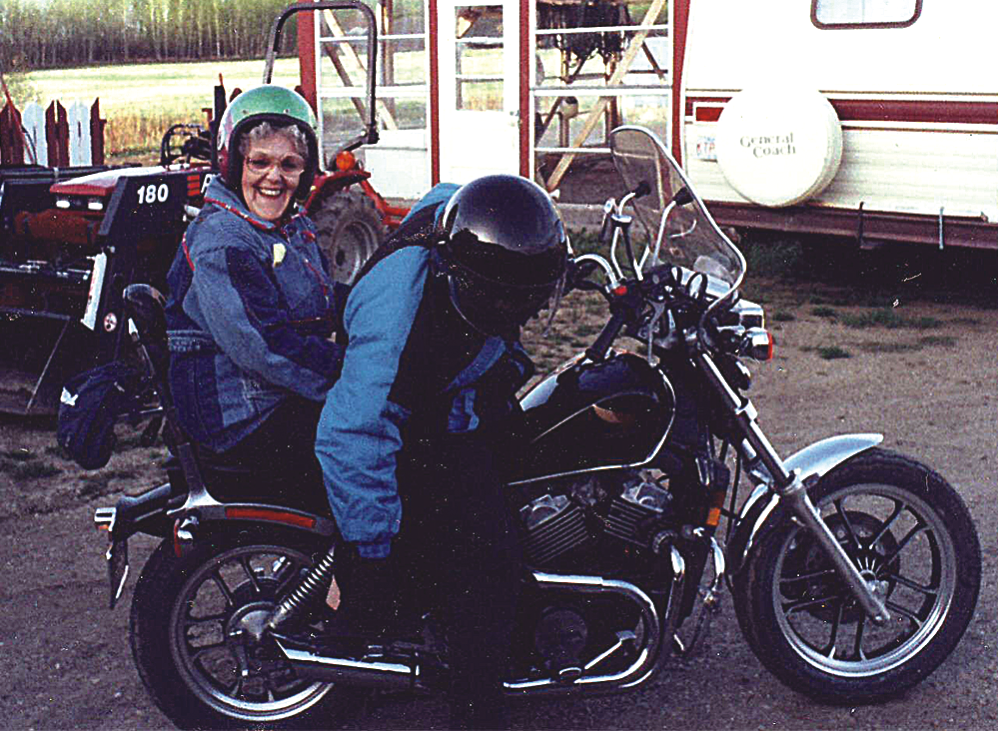 Pauline with her son, Roger, on a motorbike adventure in the 1990s.

Retirement years
When it was time to retire, they sold their house in Marie Reine and moved to Falher. He built a cabin at the Five Star Golf Course south of Falher and they spent quite a bit of time there.
In retirement, Maurice and Pauline travelled to the Maritimes, Alaska, Montreal and the continental U.S.
They made it to almost 50 years of marriage; Maurice passed away on Nov. 3, 2008.
Pauline moved into the Villa Beausejour in Falher in 2012. She has 12 grandchildren (three of whom are deceased), as well as 12 great-grandchildren.
Pauline was involved with the Red Hatters group for several years. She enjoys activities such as card games and bingo, and travels with the Smoky River Community Transportation Program to other communities when she can.
“It has been a good life,” she adds. 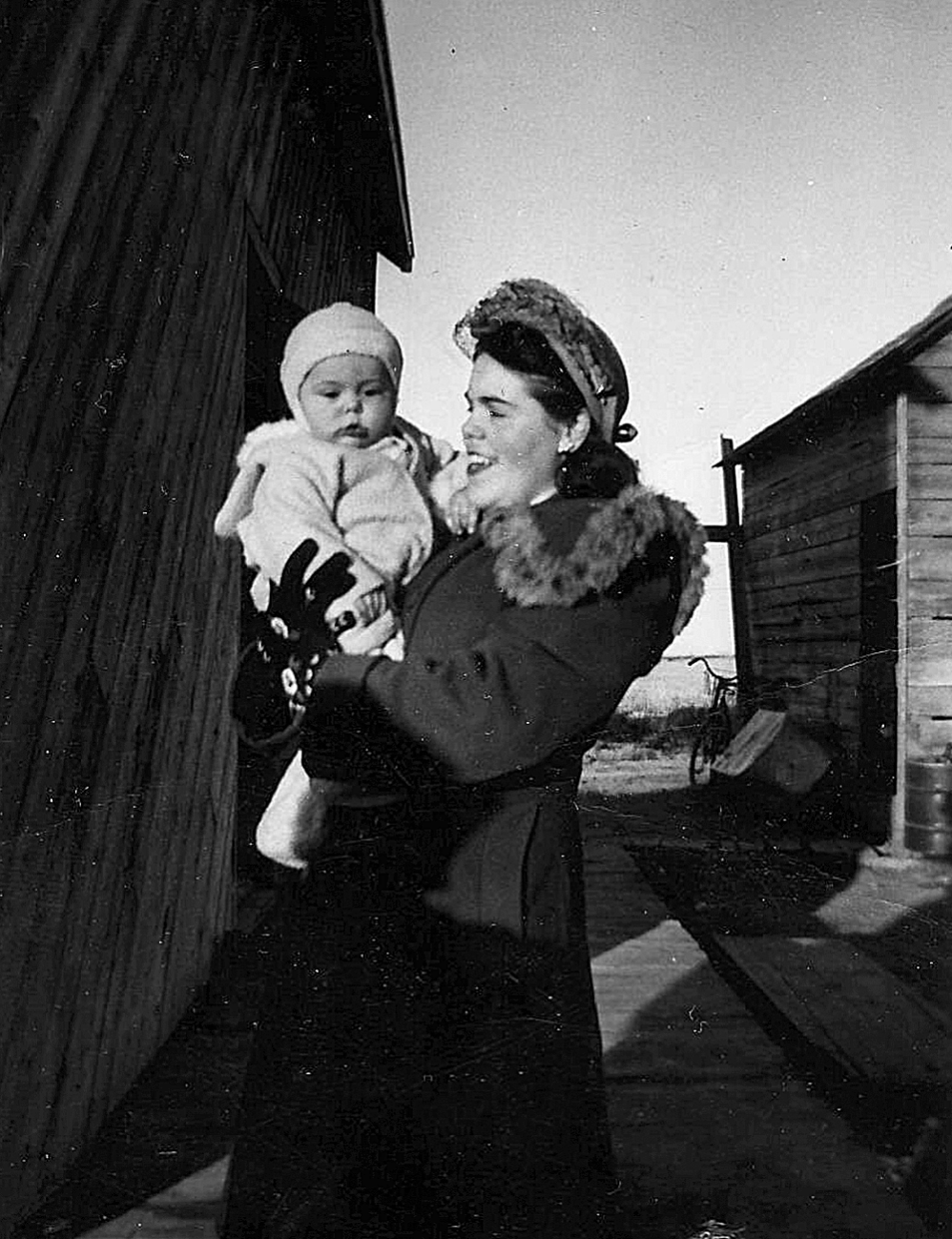 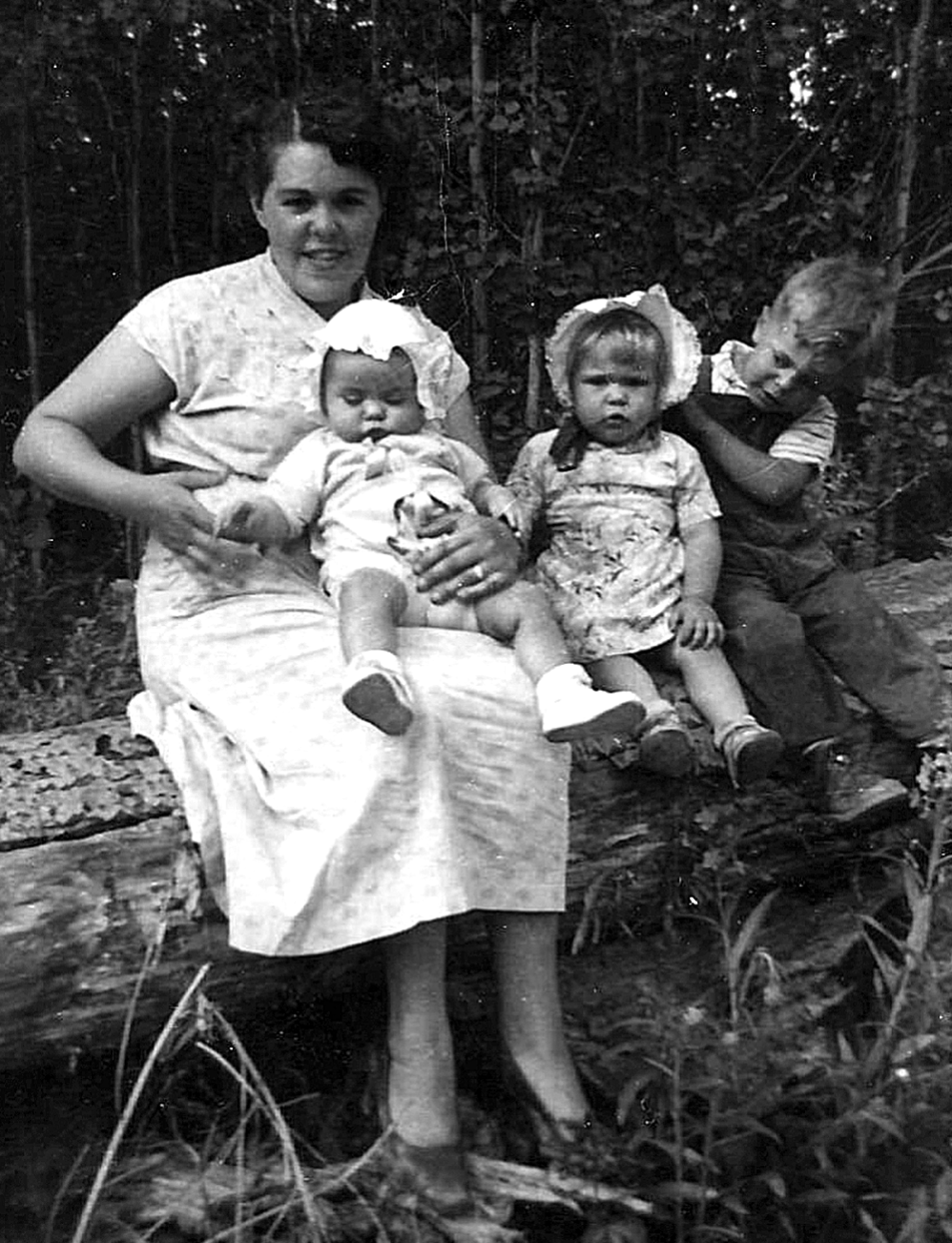 Pauline with three of her children around 1954 or 1955. Pauline holds Roger and Marilyn and Norm are sitting next to her. 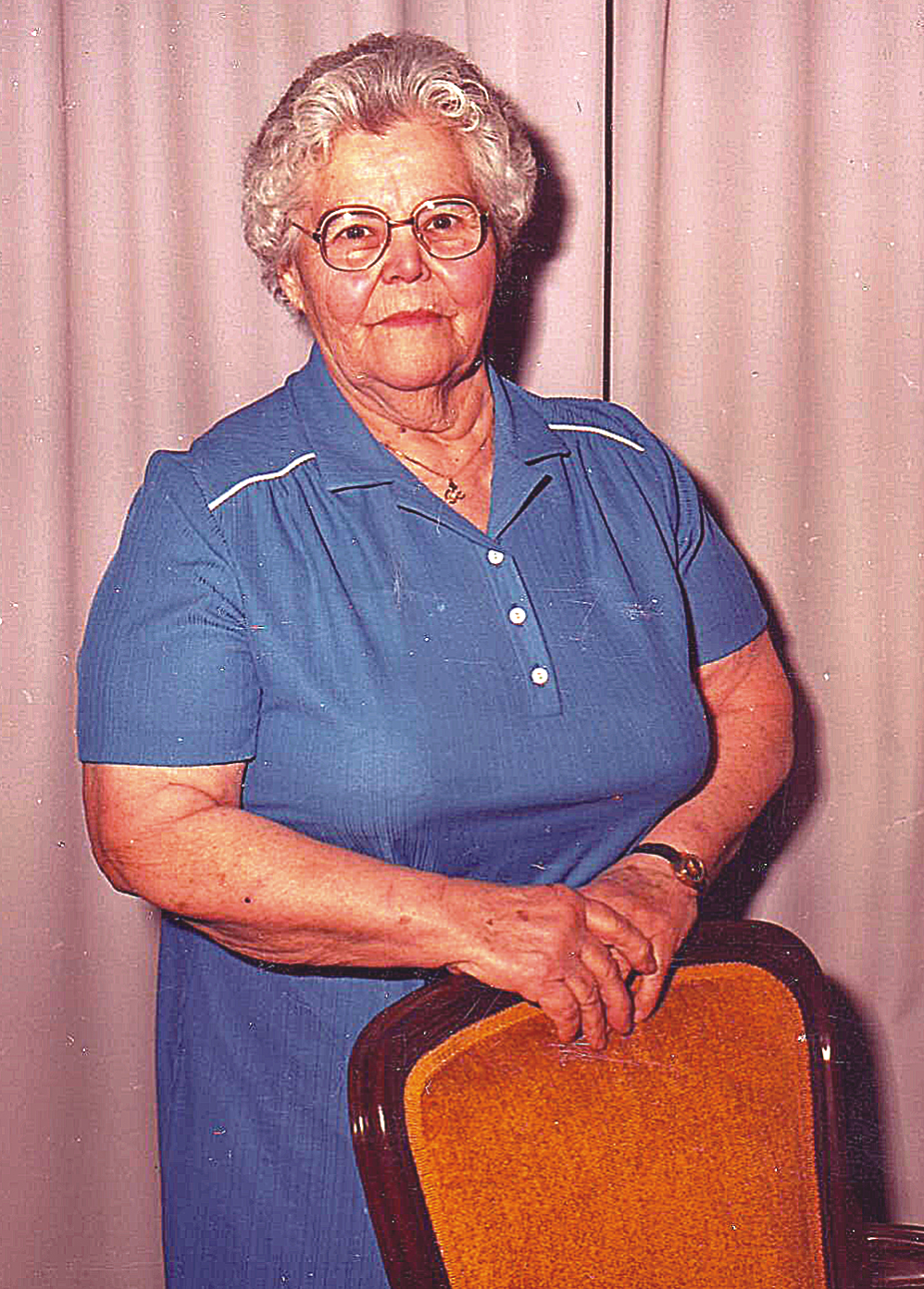 Jeannette Doucet, Pauline’s mother, at the Villa Beausejour in Falher, in the 1970s.